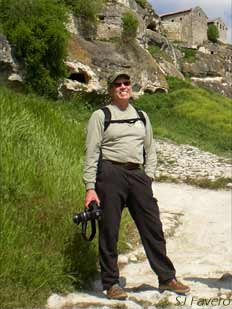 My first real camera, I purchased on the street in Naples, Italy circa 1975. Later I discovered… no warranty, manuals or documentation and realized I had made a black market purchase! Nonetheless, it was a genuine Canon SLR, through the lens of which, I quickly identified a divine attribute in every image captured, whether the face of a destitute Napolitano street urchin or the brilliant expanse of a sunrise over the Adriatic Sea.

Among a variety of early jobs I found myself running an offset printing press that left me with aspirations of future print production. When the digital evolution brought that technology to photography, I followed. I now especially enjoy printing my own images because only I can insure that their two dimensional representation reflects the vision I saw through the lens.

For me, the art of photography is more about the Giver than the taker. A visual synergy of divine gift, serendipity and a splash of creativity. I’ve come to appreciate, “that like a piece of music”, where rhythm and tempo come together to elevate the senses, an image frozen in time, taken “in tempo with nature”, can bring us in touch with our inner self and Creator.

Jeffrey Favero maintains a fine art photography gallery of  work in his native Ogden, Utah.  Having spent his formative years in Brigham City he received a BA degree in accounting from Utah State University , DDS from the University of Oklahoma and completed a General Practice Residency at the University of Utah Hospital in 1983.  Returning to Ogden, he and wife Sheila have raised eight children (four boys and four girls) while sharing photography from the walls and ceilings of his dental office for 27 years.  With the sale of his dental practice in 2009, photography, a life-long avocation and passion became his vocation.

Login or register below to enhance your experience. Create a profile, account, wishlist and/or post comments. The social networks shown may be used as an alternative method of Login.